Google serves the entire world with numerous services. It has already become the great tycoon of the tech world. It is breaking all the records by providing all services under its single logo. As we also know that tech world is enriched with regular updates, Google also contributes a chunk of innovative and up to date services. But, it’s more than a search engine in current era. Recently, Google has launched its new Backup and Sync feature. In this feature, you can easily backup your files and folders directly from your device. This new feature is the merger of Google Drive and Photos. It operates much like the consumer version of Dropbox and Onedrive.

Back and Sync in Brief

The motive of this merger is to make easy access to Google cloud through a single portal. Through Google Cloud, one can get access to their backup data in an easy way. You have an immense choice in its usage. Users can manually select the desired folders for backup unlike the Google drive which only backs up a specific folder. Afterwards, Backup and Sync feature will automatically sync new data and continue to upload it to Google Drive. This will help in keeping the data intact simultaneously on different places like computer, phone, and various SD cards etc. This is highly recommended for all those people who are conscious of losing their important data. Google Backup and Sync was developed in a convenient way to secure files just as on Google drive.

Following are the simple and concise characteristics of Backup and Sync feature.

Guidelines to Set It up in The Computer

The procedure of setting up Google Backup and Sync feature is very easy. We will guide you through step by step instructions from its installation to its implementation.

Now give permission to the application to upload the files. For uploading these files, you have to select the folders from the “My Computer” menu. By default it lists out all the user folders which come with the operating system. If user wishes to add anything else, the “Choose Folder” button has to be used. 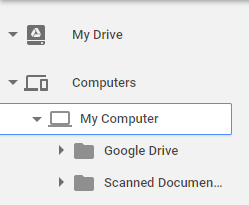 Visit this URL: https://drive.google.com/drive where you can see the uploaded files by checking into drop-down menu. There is a Computer Icon on the left side of the panel. When you click on it, folders will appear in an hierarchical form under each computer from where the files were uploaded. Additionally files uploaded to Google Drive folder can be seen in “My Drive” folder which is dedicated for legacy purpose, and only for classical Google Drive.

Configuration of My Drive Folder

My Drive is basically all in one folder. It includes all the backed up files which are synced through the former Google Drive. Through setting it up, it would be easy to find all uploaded files directly by using your computer. 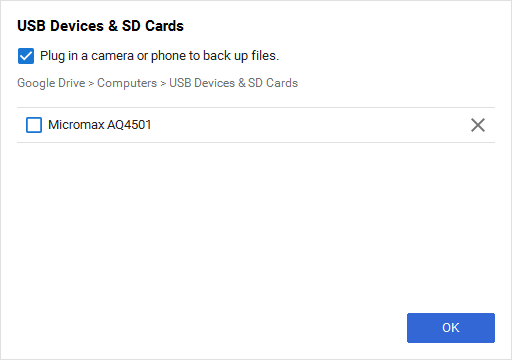 Google Backup and Sync also allows the users to connect external storage medium to have a backup of their data. Following are the steps to configure it: 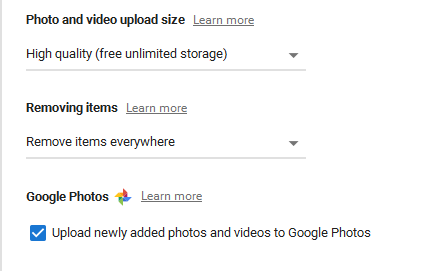 As we know that Google Backup and Sync application came into existence after the merger of Photos/Picasa and Google Drive app. So, the people who have no concern with Google Drive now have to process through it first, but it’s not a big issue as functionalities of former Picasa can be made to work with few clicks. Following are the steps to configure backup and sync to sync only photos and videos to Google photos.

How to Remove Duplicate Files in Backup and Sync

Google Backup and Sync usually helps its users to tackle duplicate files, but It’s not an easy process to be performed solely by Google Drive. However, this can be made very easy with the support of Windows PowerShell. Here is the guide about using Windows PowerShell in an effective way: